Posted on August 14, 2014 by carolynfoxshollywood 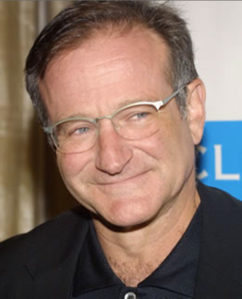 It took me a couple of days to process the shocking news that Robin Williams had passed. Although I never met him, I saw Robin Williams live at the Comedy Store on the Sunset Strip.  We couldn’t get in to see the headliner, Richard Pryor, but were delighted to find Robin Williams, unbilled, performing with the improv group on the second stage. Having starred in several big Hollywood movies, Robin would have headlined another night.

The improv group solicited suggestions from the audience, and oddly, most of the shouts from the audience were pretty crude. When a Shakespearean reference came from a patron late in the show, Robin jumped all over it. I paraphrase, “Now we get the sophisticated references. Where the hell were you when we were getting suggestions for poop jokes. Just sitting back, thinking ‘Let them suffer–perhaps later I’ll chime in with something erudite’.” Proof of William’s comic wizardry is that he got a laugh with this.

Part of Robin William’s genius was his ability share his thoughts as they happened. Most of us have an inner editor that reviews our thoughts before we say them.  Williams could give his inner editor a break, trusting that whatever he said would not only be fit for public consumption, but make people laugh. He was also willing to tell people what he thought they needed to hear–like in this standup clip:

Robin Williams could be heart-wrenchingly poignant, like in the “Bop Gun” episode of “Homicide: Life on the Street,” playing a mourning husband of a murdered wife. No one plays that kind of agony without having their own pain. This clip displays his emotional power:

It’s tragic beyond words that he succumbed to his pain. There are so few people who have such a quicksilver wit, and fewer yet who can pair hair-trigger humor the discipline to play a role and carry a movie . Robin Williams was very special and will be missed.