Posted on April 8, 2012 by carolynfoxshollywood 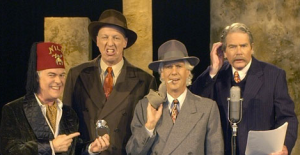 As a member of the four-man comedy troupe, The Firesign Theater, Phil worked with Peter Bergman, Phil Austin and David Ossman on such irreverent albums as “How Can You Be in Two Places at Once (When You’re Not Anywhere at All)”, “Don’t Crush That Dwarf, Hand Me the Pliers,” “The Tale of the Giant Rat of Sumatra,” and “Waiting for the Electrician, or Someone Like Him.”  If you’ve ever heard Rocky Rococo in one of the group’s Nick Danger hardboiled detective spoofs, you’ve heard Phil Proctor at work (Phil, as Rocky, is the gent in the red fez in the photo.)

Sadly, Peter Bergman recently passed away.  Phil told stories of creating and touring with Peter, who has been described as the beating heart of the Firesign Theater. Phil and the other remaining members of the group will remember Peter in a live stage show called, “Peter Bergman’s Big Brouhaha, a Tribute by The Firesign Theater,” on Saturday, March 21 at 7 PM at the Kirkland Performance Center in Kirkland, Washington.  If you’ll be in the great Northwest, you’ll want to catch this show.

Also on this week’s broadcast radio show, you’ll hear the host, Carolyn Fox, spin some of your requests for the funniest song ever.