Kanisha K! Hear the Podcast of the Broadcast of her Guest Appearance on “Carolyn Fox’s Hollywood Spotlight”

Posted on December 8, 2014 by carolynfoxshollywood 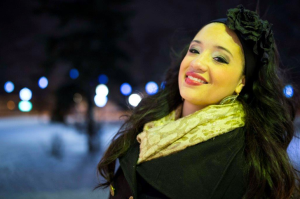 If you didn’t catch the broadcast of “Carolyn Fox’s Hollywood Spotlight” this week, featuring our special guest, singer Kanisha K, have no fear–the podcast is here. Just click on the audio at the end of this blog post to hear the entire episode.

Kanisha K joined us fresh from the red carpet with stories of the Hollywood Music in Media Award, where she won best song in the Pop category for her single “I Gotta Stupid Boyfriend,” from her self-titled CD, “Kanisha K.”

We open the show with Kanisa’s  latest single that’s burning up the radio charts, “Bring Me Home.” You’ll also hear Kanisha’s holiday tune, “I Found Love Just in Time for Christmas,” which is now featured in Victoria’s Secret or Kohl’s stores.