Posted on July 13, 2012 by carolynfoxshollywood 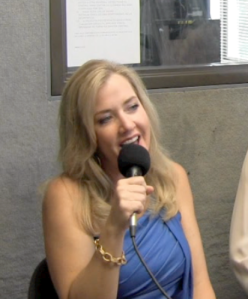 Tonight at Midnight in Los Angeles on the broadcast radio show, “Carolyn Fox’s Hollywood Spotlight,” you’ll hear a preview of new music from Deborah Wedekind, which hasn’t been produced yet.

Her new song “The Plans I Have for You“ is a pop song that could be a message to anyone you love, whether a mother to a child or an adoring husband to his wife.  It’s a special tune that Deborah sang live in the studio during her interview with Carolyn Fox.

You’ll also hear a variety of tracks from Deborah Wedekind’s new CD, “Clear Skies Ahead.”  These pop tunes range from original tunes to standards and a unique version of “Danny Boy”

Deborah also brought two of her talented sisters with her as in-studio guests, actress and singer Missi Pyle, who is known for her rule in “The Artist,” which took the Oscar for Best Picture this year, and sister Meredith Pyle, who has recently earned a Masters Degree in Musical Theater and appeared in her first TV pilot.

Tune your radio to 1580 AM in Los Angeles at midnight tonight to hear all of the music and in-studio fun on “Carolyn Fox’s Hollywood Spotlight.”