Posted on March 8, 2013 by carolynfoxshollywood 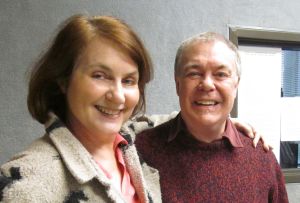 Tonight on the syndicated broadcast radio show, “Carolyn Fox’s Hollywood Spotlight,” the fabulous Phil Proctor is our special in studio guest.  You’ve heard Phil’s voice in movies like Pixar’s “Toy Story,” “Monsters Inc.,” and “Finding Nemo,” and in the long-running TV show “Rugrats.” But he is perhaps best known as a member of the classic-rock comedy group The Firesign Theater.

The theme of tonight’s show is “Heros and Villains,” and Phil has played plenty of good guy and bad guy roles.  He will be appearing  live in his home town of Goshen in the title role in “Don Quixote, the Ingenious Gentleman” with the Los Angeles Guitar Quartet.  Phil will be appearing as a villain on the dark, stylish TV show “Arrow,” and the evil Warren Vidic in the hit video game Assassin’s Creed III. On the interview tonight, Phil will share behind-the-scenes secrets about everything from shooting martial arts scenes to the difference between acting on camera, on stage, and as a voice talent.

Tonight at midnight, in greater Los Angeles, hear “Carolyn Fox’s Hollywood Spotlight,” featuring the special guest Phil Proctor, on your radio at 1580 AM, in Annapolis/Baltimore, tune into 810 AM tomorrow, March 9 at 6 PM, and hear the show online on Sunday, March 10 at the show’s website, CFoxRocks.com and at this blog, CarolynFoxRocks.com.