Posted on November 14, 2014 by carolynfoxshollywood 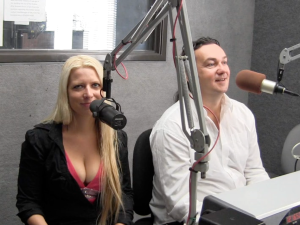 Fox’s Hollywood Spotlight” are European jazz musicians Magdalena Chovancova and Robert Fertl of the band, Threestyle. Movie star gorgeous, Czechoslovacian-born Magdalena is an amazing saxophone player, Robert is the guitarist for the band, and Magdalena’s identical twin sister, Gabriela, the drummer, making up the “three” of Threestyle. Their single, “Just for Fun” from their new “Get It” album is getting a lot of well deserved attention.

They are in Los Angeles  to record some new tracks with two-time Grammy Award winner, producer Paul Brown at his Funky Joint Studio. But they are also finding time to play some gigs, and recently appeared at Spaghettini Grill in Seal Beach.

Tune your radio to 1580 AM at midnight to hear Magdalena Chovancova and Robert Fertl of Threestyle on “Carolyn Fox’s Hollywood Spotlight,” in Los Angeles and Orange County. In Baltimore/Annapolis tune in to 810 AM, WYRE at 6 PM tomorrow, Saturday, November 15, and wherever you are, you can check out the podcast of this episode of  “Carolyn Fox’s Hollywood Spotlight” on this blog starting Monday, November 17.