Posted on July 3, 2012 by carolynfoxshollywood 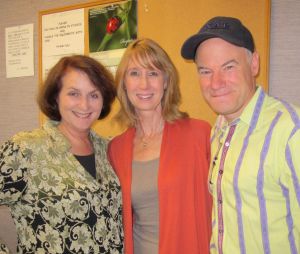 What’s it really like working as an actor in Hollywood?  This week, syndicated broadcast radio show “Carolyn Fox’s Hollywood Spotlight” welcomes special in studio guest Tamra Meskimen, one of the founders of The Acting Center Los Angeles, a school for actors that focuses on helping students book jobs.

A working actress herself, Tamra knows how to effectively audition and land acting gigs.  You may have seen her on “One Life to Live,” “Fresh Prince of Bel Air” and “Arliss.”  The technique Tamra teaches at The Acting Center, a new school for actors, helps build the confidence needed to face the rejection inherent in the audition process, as well as take direction and make impromptu changes.

Also joining Carolyn Fox in the studio is Tamra’s husband, impressionist and comedian Jim Meskimen, known for the viral JibJab videos as well as his work in movies & TV and his one-man show “Jimpressions.”  The night Carolyn saw this hilarious show, the theater was sold-out house and Jim made the audience’s jaws ache with laughter.  His next appearance in “Jimpressions” July 21 at 8 PM at The Acting Center Los Angeles.