Posted on December 7, 2012 by carolynfoxshollywood 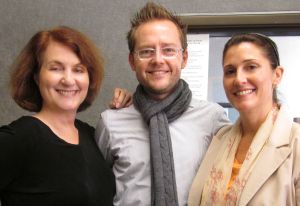 Singer songwriter Kenny Davies brings holiday cheer when he appears tonight on the syndicated broadcast radio show, “Carolyn Fox’s Hollywood Spotlight.”  With the new release of his yule time track, “Christmas Rap,” he offers a fresh song for the 2012 holidays.

Featured on the “Christmas Rap” track you’ll hear the voice of an elf singing the chorus.  That’s the voice of Laura Byrnes, who is Kenny’s childhood sweetheart.  Kenny was able to locate Laura after many years by using Facebook.  Turns out, they were both living in Los Angeles, facilitating a happy reunion and rekindling a beautiful romance.  If you’d like to see them performing together, check out this video:

Tonight at midnight, in greater Los Angeles, hear “Carolyn Fox’s Hollywood Spotlight,” featuring the special guest Kenny Davies, on your radio at 1580 AM, in Annapolis/Baltimore, tune into 810 AM tomorrow, Dec. 8 at 6 PM, and hear the show online on Sunday, Dec. 9 at the show’s website, CFoxRocks.com and at this blog, CarolynFoxRocks.com.